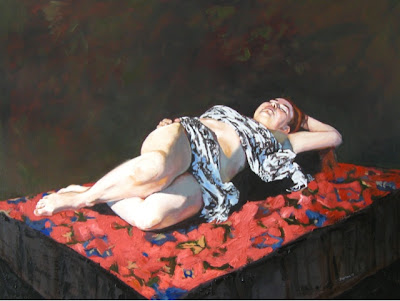 Magic Carpet
January 13, 2013
3' x 4'
Oil on Canvas
﻿
This Magic Carpet painting has been coming into bloom for what seems to be an unreasonable amount of time. It's birth was relaxed and it appeared to flourish on it's own schedule, not mine. I started this painting in September during the Alberta Arts and Culture Days. Due to the layering techniques I used to create Magic Carpet with it require extensive drying time. Therefore, I have been working on three fair sized paintings simultaneously. Working this way helps distract me while one painting is drying I can work on another. Without this distraction I might have tried to sneak in a few brushstrokes ruining the entire thing into a muddied mess of polluted colors caused by my impatience.
I date all my paintings. The date that I include is the date that the painting is finished, when the last brushstroke  is placed. I finished this painting this past Sunday. Though as a whole it's creation was lengthy but it's end was finished quite unexpectedly. I thought that I had several more hours to put into it but it seemed to just all come together to it's final state. The things I thought needed more work actually just needed a slight tweak and some areas needed to be left as is. I was making mental notes the last time I laid my brush to rest and called it a night coming closer to the paintings completion, when I came back to it they all seemed to be superfluous. I knew I needed to build the knee up and work on the face, and after I had accomplish that it didn't seem to need much more. I had started this painting months ago. For those that follow my blog, you may recognize it's early beginning in previous posts including a picture of a detail portion of it's texture in my last post and in a different posting about my studio. I have also done a small, what I would now call, study of this same pose at a minuscule size in comparison with this larger painting.
I have resorted to titling it Magic Carpet because in it's early state I worked quite a bit on just the cloth the figure is laying on and I had for the longest time left the two triangles on the bottom corners blank giving it the effect of being a floating carpet. My Significant Other started to refer to it as the Magic Carpet Painting and he was constantly pointing out this one area I had yet to work on, so it is hard for me to think of it as anything but the name he gave it of Magic Carpet.
I feel like I am repeating myself a bit when I say, the painting looks and feels nothing like what this photo captures. It was terribly difficult to photograph. Standing in front of it it seems to take up much more space than it measures. It has a significant presence.
I am quite excited about this painting because I have pushed myself and explored the juxtaposition between thin scuffy layering where I used thin washes and often used rags to wipe away layers into thin veils of color. Then I took different tools to slap on and vigorously push thick dragging layers where the different colors and shades of paint don't just sit on top of each other but intertwine, play, and blend creating a completely new surface plain for light to reflect off of. This creates a major problem to photograph and to capture the feel of this image through a lens because when you move and interact in front of this painting you can see it differently in new light, rediscovering the painting over and over again.  That is why I love original paintings.﻿
Posted by Daphne Cote at 4:35 PM