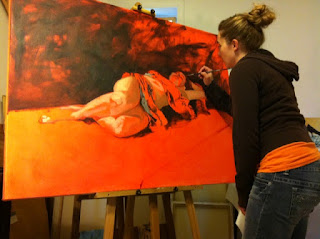 I will be at the Stony Plain Public Library this Saturday September 29th from 10am-3pm showing and working on paintings live. There will be other arts and cultural figures from the community there as well.
You can come down and see my latest painting in progress, chat and ask me about art, and find out more info about my upcoming studio show and sale being held on October 19th and 20th that is raising funds for me to ship my work to an international portrait contest. You can also inquire about commissioned work as well ( I am still accepting commission requests for Christmas).
I am really looking forward to it. I love sharing my passion of painting with others. I had a great time last year and I know I will this year as well.

The above photo was taken by my 4 year old daughter. In the photo I am working on my latest painting that I will continue working on at the library this upcoming weekend.

I hope everyone gets a chance to celebrate art this upcoming weekend.
Posted by Daphne Cote at 3:51 PM No comments:

Confluence - The Sleeper and the Insomniac Series 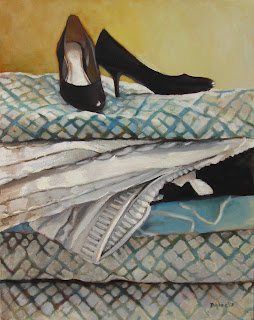 This painting is a continuation of The Sleeper and the Insomniac series. I started this painting before my son was born and have been dabbling on it ever since.  I finally got to finishing it. I constantly think about furthering the series. I have to find somewhere to show a larger collection of the work and find willing models (if you are interested in filling either of those roles email me! [email protected] ). I itch to paint another set of sleeper paintings.
Now that the dawdling lazy pace of my care free summer is over, I am finding a consistent painting/working schedule. I didn't even realize how relaxed my summer was until September hit and the rigid schedules and routines of the school year commenced. It caught me quite off guard this year. I found myself waking up and laying in bed questioning why we have to be at school right at 8:30, would 8:34 be ok? This whole summer I was late and early by whole hours with not a care in the world. I marched to the beat of my own drum. Now the drum is pounding down the minutes and I swear my life is run by timers, alarms, calendars, and reminders. I know in my rational thought process it will become an easy routine that will feel more natural and in the near future I will need less caffeine and wine.
I have started to schedule in my working/painting time. Creating a solid routine has already been beneficial for my growing painting career.  It's hard work being an artist. It's not just playing with paint all day, although luckily some days it is. I have to do a lot of correspondence work, which is often quite encouraging and inspiring.
I feel so fortunate to have this opportunity to pursue my art career as a painter. Thank you to all the wonderful people in my life that support me especially my Significant Other and my many patrons that make what I do important. I hope you stay tuned as to what happens next. The sky's the limit in my heart and mind. On and Up!
Posted by Daphne Cote at 10:34 AM No comments: 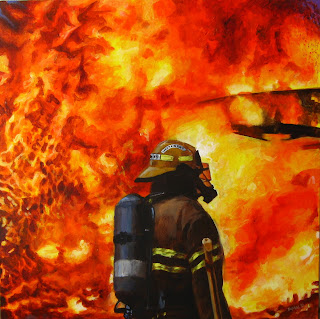 I was given the wonderful opportunity to create this commissioned piece. I was unable to post anything about it until today, which is the fire lieutenants birthday. This post is published to coincide with the receiving of his portrait ( his wife and I didn't want to ruin the surprise).
This portrait of  Lt.Billy Cummins was an absolute joy to work on. As soon as I saw the reference material that Billy's loving wife Megan showed me I knew that it was something I had to do. Immediately my eyes started to draw out how I was going to make the composition, which type of canvas I was going to use, that it would have to be done in acrylic paint, and which colors I was going to use.
What I love, just as much as creating the painting, is the reaction it has gotten from first time viewers. I know that I have done a good job when a piece renders people a bit speechless at first and I can see that it hits them with emotion before their language skills can even calculate what is going on. Many viewers first physical reaction to this painting was a slack jaw. It always makes me shout "YES!" inside, knowing I have gotten it right. It is very hard to judge one's own work, so I have to rely on others. When people have a bunch of comments to say right from the start, then I know I have more painting and tweaking to do to complete the painting.
I just wish that I could take a photo of this painting that does it justice, but it's impossible. That is the great thing about owning original paintings is that they are there to be physically experienced. I did several layers of paint and acrylic gloss to create the fire in contrast to the figure which was left matte. When you walk in front of the painting from one side to the other the fire shimmers and the figure stays stoically still in it's midst. This helps to give an illusion of movement.
Thank you to Megan Cummins, you were a joy to work with and I hope that the painting brings as much joy to your family as it did me in creating it.
(Thank you, also to all of Billy's co-workers that helped by sneakily taking photos of his new Lt. helmet so that I could accurately portray it.) 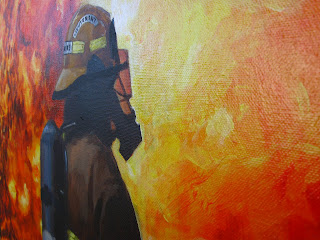