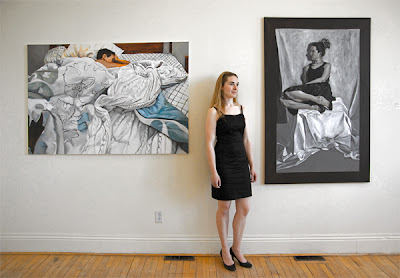 Me between a Sleeper #3 and an Insomniac #3
I lost my breath when I stepped into the Gallery. Seeing my solo show for the first time had a very powerful effect over me.  All the recent paintings I have been lovingly creating are finally displayed in a distinguished environment that truly lets the work shine. It almost brought tears to my eyes. I focused, breathed deeply, and continued to take one step in front of the other confronting the work in this new light.
The Multicultural Centre Public Art Gallery is a perfect place for my show 'The Sleeper and the Insomniac'. The simplicity and history of the space and the wonderful natural lighting provide the perfect ambiance for this series of paintings. It was very inviting as people strolled in and out of the gallery. 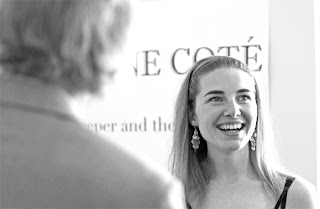 I was happily overwhelmed by all my friends, family, and community that came to the Artist Reception on May 1st to meet and support me. We shared some wine and laughs. We talked about the work. I received wonderful input and encouragement. So I would like to extend my gratitude and thanks to all that have helped me to get to this point.
My children were beyond well behaved when mommy was working in her studio. They would work on their own projects. My daughter dabbled in tempra paints and my son constructed elaborate sculptures and robots out of boxes and several rolls of tape.
My Significant Other was incredibly helpful. He was not only forced to live around the spaces these larger paintings took up but he was also a wonderful spring board for ideas. He was an amazing listener as I was half talking to him and half talking to myself about issues and situations that came up during the process of creating these paintings. He was my model, child herder, canvas carrier, and grand encourager. With an open ear, mind, and heart he unquestioningly and understandingly supports me. I would love to climb a mountain and yell out for all to hear the emotional gratitude I have for him. 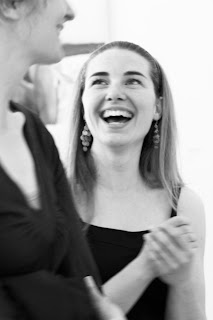 I would also like to send a very appreciative thank you to John Maywood, the curator, and head honcho at the gallery. He threw this wonderful opportunity in my lap with much faith that I could complete the work in time. His belief in me gave me confidence. His words and critiques gave me the courage to take a few more risks with this work allowing me to be more bold and daring. This show allowed me to do work that I really wanted to create. This allowed me to create paintings that I am truly proud of. 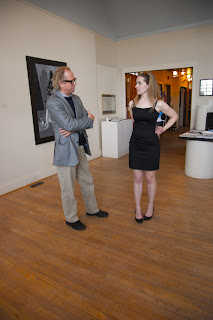 John Maywood and I in a discussion.
I would also like to extend a warm thanks to Seamus Smyth who wrote a wonderful article on the show. Since his article on the show was published I have been stopped by people I don't know several times and asked about or congratulated on the show. Seamus' articles are incredibly enjoyable to read. He was very attentive and I feel he did a great job of capturing the essence of what I do visually through his written words. (I have included a copy of his article below.) I am looking forward to my next post which is a project that Seamus and I have worked on together.
I would also like to thank Adam Swanson who so kindly came out to take the wonderful photos that I have included in this post. I think his work is amazing and he really captured a part of me. He made both me and my work look amazing.
The Sleeper and The Insomniac will be up until May 10th. I encourage you to go and see it.

STONY PLAIN - A sudden idea for a new colour, a new image, perhaps even a new project, erupts into her consciousness as she begins to consider dosing off for the evening.

Instead, while everyone she is in contact with has drifted off into a deep slumber, she makes her way down to her studio basement and turns on a sole, dim light to allow her creative forces to release as they please.

She feels no guilt for she is not neglecting any of her loved one's time, who are sound asleep as she paints away in the heart of the night.

Local artist, Daphne Cote embraces the midnight hours, a time where her skills appear to flourish. Her latest work acknowledges her odd work schedule, but also praises the ability of others to peacefully drift away for countless hours in her latest display at the Stony Plain Multi Cultural Heritage Centre.

"The Sleeper and the Insomniac" captures two distinctly different settings that somehow complement each other when viewed side by side.

"The Insomniac" a dark, monocramatic, acrylic piece portrays a fashionable young female who appears to be anxiously awaiting for the night to begin, or perhaps someone to join her for the evening.

"She may be waiting or she might be bored. It is clearly a dramatic scene," said Cote who made it clear that she preferred to allow viewers to create their own perception of what is going on.

"I would hope that it would evoke something in their own lives or that it might remind them of a person they know or a time in which they lived," she explained.

Suggestions such as it may remind one of a good time with friends or even a time when someone was neglected, which may be upsetting to some.

While "the Insominac," blends elegance with a twist of doubt, "The Sleeper," is a comfortable, sea of blankets.


Although it may be difficult for her to relate to someone who can sleep for over six hours a night, Cote understands that some people just need to rest their bodies and minds more than others.
Both concepts are displayed in various sizes with both reaching just under four by five feet at their largest scale.

I do prefer to go bigger. I can get a bit more physical with them; they fit like a good dress," she laughed.


Not only is it a personal preference to stretch her work out to an extravagant size, but she considers where a fan of her work would wish to place the work in his or her home.


"I do kind of hold that in mind that these will have a home in the world somewhere," she said.


She listed Ray Lamontagne as the music that kept her company during work for "The Sleeper," and Cat Power: the Greatest for her alone time with "The Insomniac."

However, there were times where she drifted back and forth between the two pieces as she began to understand their connection while the soundtracks echoed in the background.


Although she is aware of where the origins of the two works came from, she again insisted that her goal with her work is to stimulate conversation.

"These are just fleeting moments that I have caught and try to project out in the world," she said.

"The Sleeper and the Insomniac" by Daphne Cote will run from April 22 to May 10. The opening reception is Sunday May 1 from 1 – 3:00 p.m. at the Stony Plain Multi-Cultural Centre.
Posted by Daphne Cote at 2:01 PM 1 comment: