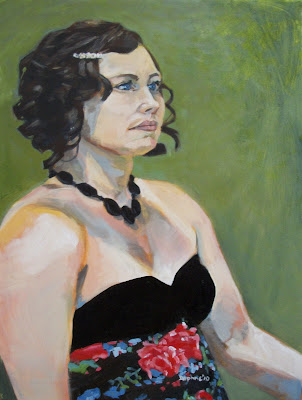 Portrait of Dawn
September 24, 2010
18" x 24"
Oil on Canvas
This is a portrait of my friend Dawn. I have been working on this painting along with several others over the past month to month and a half. I had done a similar portrait of Dawn, in the same pose, at my demo in August at the Allied Arts Council. The painting from the demo is not blog worthy and will probably be painted over. It doesn't need to exist after the creation of the above painting, it was merely an example like an instructor writing on a white board, it served it's purpose and now can be erased. Though it deserves to be noted because the pose and model were so excellent I took pictures knowing I would tackle the subject with greater depth and in oil paint instead of acrylic (which the demo was in) at a later time. The model has so much character and is truly a beautiful person inside and out and everything about her sitting from her hair and ensemble to her focused gaze deserved more attention and exploration. It was hard doing a portrait of someone I know quite well and see almost every week, but I think it worked out beautifully.
I haven't been diligently posting my work the past couple of months because I have been working quite intensely. Normally I work on only one or two paintings at a time. Over the past months I have started working on several at the same time. I am doing this for a few reasons.
One of the reasons is the drying time. I have started fooling around and experimenting a bit more with solvents (and if anyone has any tips, opinions, or suggestions on using solvents or mediums with oil paint I would greatly appreciate it). I have been working a bit more with layering instead of constantly working wet in wet. You may see this especially when it comes to the background of the Portrait of Dawn.
Then there is the fact that I have a deadline creeping up. I will be having a show starting at the beginning  of November at the Multicultural Centre in Stony Plain. My paintings will be chosen for the show at the end of this month. I have many paintings that I want to pump out by then.
Right now I have so much that I want to do, so much creative energy and drive that it is hard to stay out of my studio.  I actually thrive under pressure. This month has brought such frenzy with the kids going to various classes, school, playdates, appointments, etc. So, when I do go into my studio I am like a small child that has been stuck in a car for hours and then is let into a play gyms pit of balls. I throw stuff around, dump stuff on the floor, and I don't seem to get around to cleaning my brushes either. I am quite sure some painters, and my sister, would be appalled at the chaos that surrounds my work habits.
There is also the issue that I have numerous ideas and reference material for new paintings that I am trying to work things out as fast as I can. I don't wait for a painting to dry before pulling out a canvas for the next one. Thanks to my love, I have been the fortunate recipient of an IPad, which has sped up my creative process. I don't have to alter or crop photos, or print them off before using them as references for paintings. Over the past year I started painting from images right on my computer screen because I find printed materials limiting especially in color. Now with the IPad I can place it anywhere, zoom in and out and in a sketch app draw right on the photo to test out ideas. Although the technology helps me cut corners, I still like to use real still lifes and I keep my trusty sketchbook as well. I have to have a balanced practice.
At this moment I have 5 paintings on the go. I have another that I just finished that I will post soon. So watch out because you may start to get bombarded by my work being posted. I hope you enjoy it.
Posted by Daphne Cote at 12:53 PM

I am so lucky to know such an amazingly talented beautiful strong woman; you did a great job on the painting! You deserve this next step in your life and I know that your work will do wonderfully in your show. I can't wait to sit down to lunch surrounded by you art. xxoo D

You GO GIRL!!
I look forward to viewing these works.