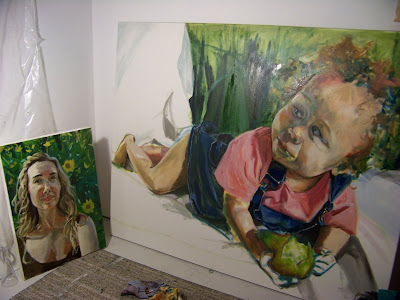 Not Finished and Still Wet.
I would like to thank all of you who participated in the Alberta Arts Weekend.
On Saturday I was painting and showing some of my work at the Shikaoi Park in Stony Plain. There I worked on the larger work of the little girl with a pear. I spent about 5hrs working on it, with short breaks in between to meet and chat with people. I really enjoyed myself.
I told myself that I wasn't going to put this in my blog, but really it truly effected my painting and maybe delayed it in being finished. Well, here's the background story for the day, and the large painting...
I have most of my large work hanging at my mother's house. She has a large house with plenty of space to hang large work. There is a painting of mine in her dinning room that has been there for a while. My mother likes change and she usually changes around her furniture configuration every year when she feels the urge. Well, the old painting has been there for a while and she was thinking about switching some paintings around to freshen things up. I told her I would take the painting because I have a space for it and I have an attachment to it. She said she wouldn't mind a new painting. I told her I didn't have any paintings on the go and would love to paint a big one from scratch, then she kindly suggested that she would like a huge pear. I took her suggestion and twisted it, because I like to bend the rules.
I had my daughter pose for me and before the Art Day in the park I mapped the composition out on the canvas so I would have a head start.
It was a beautiful day. The sun was shinning it was neither too hot nor too cold. The birds were chirping, artist were getting together and all was going smoothly. I was painting away and the painting was off to a good start when, I got a phone call. My husband phoned to say that he was on his way to the hospital with my daughter who got her hand slammed in a door. I was constantly waiting for his calls to update me. It was hard to do this painting because the figure in the painting is my daughter that I was very worried about especially the condition of her hand. That is why, whenever I got to the hands, I just couldn't do it. I was too worried about what was happening to her. She is doing ok and has a temporary cast till the swelling goes down. Now that I know she is going to be ok, I can, and look forward to, finishing this painting.
The smaller painting I worked on this afternoon at the Allied Arts Council Gallery. It is a self portrait that was fairly scary when I started but it really came around at the end. It's not finished either. There are a few minor adjustments I would like to make and some details that I feel are needed in the background. Even though these paintings are not done I wanted to have an image to go along with my post today. Reading is always more interesting when there are pictures.
Posted by Daphne Cote at 8:14 PM

Self portraits are tough, good on you for attempting it, You make it look easy! Glad to hear your girl is okay. l look forward to seeing the finished painting!